More things to do with eggs (a.k.a. a Savory Dutch Baby)

I saw this recipe come through my Twitter feed a few weeks ago and then last weekend a friend made this and posted it on Instagram and it looked delicious so when Sunday morning rolled around and I was trying to think of something that 1) used lots of eggs 2) was a little different and 3) could possibly make leftovers this fit the bill perfectly, NYTimes Savory Dutch Baby.

The dish is super simple to make, eggs, flour, salt, pepper, herbs all mixed together and poured into a cast iron skillet over a few tablespoons of freshly made brown butter and then topped with cheese.

Mine did not puff up as evenly as Ashleigh’s but it tasted great. The bottom almost had the consistency of a pie crust and the top was salty and cheesy and crispy while the middle was eggy and custardy, a perfect combination of different flavors and textures and a great way to start off a Sunday.

For one of our themed wine dinners a few years back I opted to make a ceviche as one of our two dishes to contribute. I’d never made it before, was honestly rather intimidated by the idea of relying on citrus juice to cook the seafood, but was pleasantly and deliciously surprised by the result. Each time I’ve made the dish I’ve based it off of Simply Recipe’s Ceviche recipe but switched up the seafood mix. Scallops and shrimp, white fish and scallops, just shrimp…as long as everything’s an equal size and the seafood ends up being two pounds worth, just about anything will work. It’s cool, refreshing, flavorful, and perfect for these hot summer days. (Plus, the latest time I made it I opted to serve it in my grandmother’s vintage shrimp cocktail dishes, it looked so cool.)

Growing up, I always loved pickles. Especially “Bread & Butter” style ones, sweet and tart at the same time and I could eat a dozen in a sitting. During the summer my mom would make quick pickles with the cucumbers from our garden just sliced up with some rice wine vinegar (often a flavored one with dill or other herbs) and those were just as tasty. Now I’m finally moving on to other pickled vegetables. For the longest time I was dubious of pickled beets (were they really that color? Answer: yes) and other veggies as it just seemed that the texture would be really odd. But when we joined our CSA we would get beets, cucumbers, red onions, and oftentimes we weren’t quite sure what to do with them. I roasted the beets once, but then decided to be adventurous and try them pickled…they’re really tasty that way!

For a recent spring potluck meal I made pickled shredded beets, using our mandolin to shred the beets into matchsticks (and chopping the beet green stems as well) then concocting a pickling spice mix (I think I used this recipe from Williams-Sonoma) and combining that with equal parts rice wine and cider vinegar. I didn’t pre-cook the beets, just put them into the hot pickling liquid and that quick cooked them. They were a hit at the potluck so definitely will go on the roster to make again.

Another good pickled topping recently discovered is pickled red onions. We made the Salt Baked Herbed Salmon with Onion and Caper Vinaigrette from Food52’s Genius Recipes cookbook and the salmon turned out wonderfully flavorful and moist and the onion topping was one of my favorite parts of the dish. That sauce ended up on tacos, eggs, salads and anything else I could think to put it on as we were going through the leftovers.

I first encountered this dish at Mas Tapas in Charlottesville, Virginia and have ordered it every place I’ve seen it since. The combination of sweet and salty, sticky and crunchy is just amazing. For Wine Dinner: Tapas Edition we decided to opt for a recipe from Food & Wine Magazine that tossed a bit of chorizo into the mix as well, we were not disappointed!

We had tried in previous years to hold a wine dinner outside and were unfortunately thwarted by an inopportune rainstorm. This year, however, we lucked out with a beautiful 70 degree, low humidity, partially sunny Saturday evening. We moved our dining room table outside, brought out our ever so fancy sheet of plywood to expand the table to seat eight people and set everything up. It’s always wonderful to eat outside and much food and wine was consumed and merriment had (per usual) that night.

After the success of the roast pork from the Heritage cookbook and wanting a simple tasty dinner the night before Valentine’s Day, I delved into the cookbook again to see if Brock had a take on simple roast chicken, and he did. Utilizing the ever wonderful cast iron skillet the chicken is first butterflied then split in half, then browned and pressed in a cast iron skillet to wonderously crisp up the skin then finished in the oven. Served with stacked scalloped potatoes, garlic confit and a simple lemon herb gravy from the chicken drippings, this was just what was needed on a chilly winter night.

After the first few attempts at thinly sliced potato dishes Jeremy came across this recipe on Food52. It promised crispy, flavorful potatoes stacked up in little compact towers and baked inside muffin cups. Sounded simple enough and simplicity definitely won out. The tops were crispy and browned, the middles were soft, cheesy and very flavorful with the rosemary and butter. Plus (if we had had enough muffin cups) really easy cleanup!

So this recipe definitely wins out of all the scalloped potato recipes so far and will be added to the dinner repertoire. 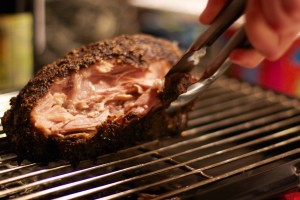 I have been on the lookout for a good “standard” potato gratin recipe for years. It seemed every time I tried making the dish the potatoes were underdone or the flavor just wasn’t up to par with what I’ve had at a restaurant, so when I came across a potato gratin recipe from Food 52 for a “gratin that cooks in half the time…and lets you have control all the way through” I had to try it.

Technically I think the dish turned out well, the potatoes were cooked through, the sauce was creamy, the cheese browned, but I definitely under-seasoned things. I deviated from the original recipe and added about 1/3 cup of milk to the potatoes when they were boiling as it just didn’t seem like there was enough liquid there to cook with. I should’ve trusted the recipe on that step, once the potatoes settled into the pot and were stirred periodically there was more than enough milk there and I think my additional liquid made the end result runnier than it was supposed to be.

You’re instructed to season to taste right at the end of the boiling-potatoes-in-milk step of the recipe and I thought things tasted ok at that point, but by the time everything had baked together (and the potatoes absorbed the half and half) the result was a bit on the bland side. I added cayenne pepper as well as the nutmeg the recipe called for and was hoping for a hint of heat to cut the super creamy sauce but I think I was too light-handed with that too.

I would also use a different cheese than Gruyere for the topping. For one, at least in Williamsburg, Gruyere was a bit difficult to find and rather expensive. Second, aside from allowing the top to brown and getting a little golden-brown-deliciousness there was little flavor that the cheese added to the party. It was also only added to the top of the gratin and not integrated at all. So next time I will use a cheese like cheddar, swiss or similar and and integrate it throughout the layers of potatoes as well as on top.

So, overall, a good recipe base, but lots of license can be taken with the seasonings and toppings to jazz it up, and next time that’s just what I’ll do.

When we decided to try out Sean Brock’s slow cooked pork shoulder recipe from the Heritage cookbook we concluded the rest of the meal should be Southern-themed as well. I had made some pimento cheese earlier and that seemed a perfect appetizer option. We also had some Virginia peanuts from our CSA that we had roasted and were sitting in the fridge and Jeremy decided to take some inspiration from the “Bar Peanuts” we had a the Rogue Gentleman in Richmond and sautéed them in butter with a generous amount of fresh cracked black pepper and Maldon salt.

Dinner came together perfectly with the pork, tomato gravy, potato gratin and roasted brussel sprouts with pancetta (provided by our dinner guests). Definitely need to go “Southern-inspired” for dinner more often. Simple ingredients, un-fussy recipes, and a good bottle(s) of wine? A recipe for success.